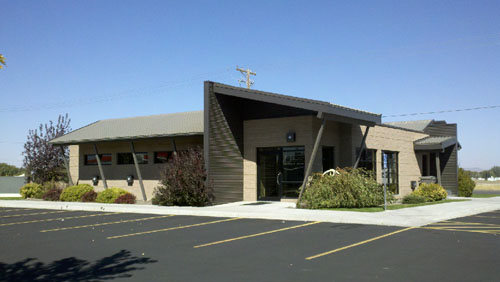 Our mission at Madison Ridge Chiropractic is simply to serve you. We provide excellent chiropractic care to help our patients reach and exceed their health goals. We assess the patient as a whole. We want to address the main concern, but also lead you into a lifestyle of being pain free. We do all of this by offering an evidence-based approach to chiropractic care by utilizing chiropractic manipulation, soft-tissue techniques, therapeutic rehabilitation, and a variety of chiropractic services to help achieve your health goals.

Dr. White is a life-long resident of Rexburg, graduating from Madison High School and Ricks College (now BYU-Idaho). He and his lovely wife, Christina, have four wonderful kids, along with a host of adorable pets. They love southeast Idaho and all the wonderful people in this area. They enjoy the outdoors with activites like: hiking, four-wheeling, camping, fishing, hunting, white-water rafting and kayaking. The family loves to be active, by participatin in a wide variety of sports, dance, gymnastics, and multiple musical instruments. Their main priority is the family and Dr. White specializes in treatment for all, including pediatrics and maternal chiropratic care.

Dr. White’s loves is sports medicine. He has been a team trainer for the Madison Bobcats for seven years, including being an actual boys basketball coach for the last five years. Athletes from all over the valley have been treated and rehabilitated by Dr. White, including several from the collegiate and professional level. Dr. White is certified in Graston Technique, an aggressive soft-tissue technique that has been recently used by Olympians, including Michael Phelps.

The #1 goal of our office is to assist you in the full recovery from any condition/injury/pain, so you may be able to enjoy life the way it was meant to be enjoyed–at its fullest!

Dr. Ryan Nye grew up in Rexburg, Idaho and graduated from Madison High School. He served a mission for The Church of Jesus Christ of Latter Day Saints in Brazil before returning and graduating from BYU-Idaho(Bachelor of Science in Exercise Science). He met his wife, Diana, at BYU-Idaho and they had their first child here before heading off to Portland for chiropractic school. Dr. Nye graduated from The University of Western States earning a second Bachelor of Science degree in Human Biology, a Master of Science in Exercise and Sports Science, and a Doctor of Chiropractic.

Dr. Nye and his wife have 4 children. They have returned to Idaho to be around those they love and raise their own family in this wonderful community. They love outdoor activities including white water rafting, skiing, snowmobiling, hiking, hunting, fishing, and camping. They also enjoy basketball, baseball, football, and golf.

During his educational pursuits and training, he had opportunities to treat many different types of conditions ranging from your everyday low back pain, chronic headaches, pediatric care, maternity care, MMA and tri-athlete injuries. He was volunteered at South Fremont High school as their athletic trainer for the past 7 years treating their athletes for their various baseball, football, volleyball, and basketball injuries. Dr. Nye uses diversified technique, K-Tape, instrument assisted soft tissue manipulation, and other soft tissue techniques to treat a range of musculoskeletal conditions.

Dr. Daniel Parkinson was born in England on a United States Air Force Base, but grew up in Meridian, Idaho. He graduated from Mountain View High School where he participated in various athletics. While participating in sports he developed a passion for not only training or teaching others how to perform at their best, but also how to recover after an injury. That passion is what drove him to start the path toward the healthcare profession.

After serving a 2-year mission for The Church of Jesus Christ of Latter-day Saints in Sao Paulo, Brazil he received his first bachelor’s degree in Exercise Physiology at BYU-Idaho. While at BYU-Idaho he met the love of his life, Hollin, and they were soon after married in the Spring of 2013. They now have two beautiful children (one boy and one girl) who keep them busy, but even in the tough times bring them happiness. His whole family loves watching and playing sports of every kind and enjoy being active together.

Dr. Parkinson stumbled into chiropractic while looking for an internship with sports medicine doctors. He performed that internship right here at Madison Ridge Chiropractic, and while here he saw the joy and relief that the other doctors at the time brought their patients without medication or surgery, which led him to change his future path from an Orthopedic surgeon to a Chiropractor.

He graduated from The University of Western States with his Doctorate degree in Chiropractic, Masters in Sports Medicine, and a second bachelor’s degree in Human Biology. While in school he helped various athletes of varying levels of competition, provided relief for the elderly, worked with expecting mothers, and helped children recover from their aches and pains of many kinds. He was trained in diversified technique, but also utilizes a variety of other techniques including taping techniques, instrument assisted soft tissue manipulation, ultrasound, cupping, and many other techniques in order to treat a wide range of musculoskeletal conditions while not being limited to the back and neck.

Dr. Parkinson truly believes that every person regardless if you play a sport or not should be treated as an athlete in order to move and function at their best. He desires to work with each patient to find the best treatment approach for them according to their needs and desires. He aims to help each patient feel, move, and perform better so that they can be at their absolute best.

My name is Lance Munns. I was born and raised in Rexburg and grew up in a farming community a few miles South of the town. I grew up helping my father, grandfathers, and uncles farming and ranching. We have a big family, and all of my siblings enjoy camping, fishing, hunting, and riding 4-wheelers.

Athletics are a big part of my life. I played football, baseball, and basketball growing up and continued to play at Madison High School where I graduated in 2010. Another activity I enjoyed very much was Ballroom Dancing. I was a part of the Idaho Ballroom Academy where I was trained to compete in individual settings as well as team competitions. We competed many times here in Southeast Idaho, and also traveled to Utah, California, and England.

I served an LDS mission in the New Mexico Farmington Mission where I served on the Navajo Indian Reservation. Upon my return, I was accepted into BYU-Idaho where I earned a Bachelor of Science with a Major in Exercise Physiology. During my time at college, I was a part of the school’s touring dance team, Dance Alliance, and had the amazing opportunity to travel to and perform in several states in the U.S. as well as Eastern Canada, Costa Rica, and Panama. I also was a Student Instructor for the Beginning Ballroom Class for 2 years and Beginning Country Dance Class for 1 year.

After graduating from BYU-Idaho, I was accepted to Parker University in Dallas, TX to study Chiropractic. My dream to become a Chiropractor started in high school. Growing up, I had been adjusted on many occasions, and it fascinated me how the doctor could ask a few questions, perform a few tests, and gain a decent idea of what the problem was. Then he could help me get better by performing a simple adjustment. I decided I wanted to learn how to do that. While enrolled, I fell in love with anatomy and how the body functions with specific movements, and how I can help people like I was helped so many times. During my final year at Parker, I was also accepted into the Animal Chiropractic program where I learned how to provide care to household pets and livestock. I earned my certification with the AVCA (Animal Veterinary Chiropractic Association) shortly after graduating from Parker in 2021.

I am excited to serve the people of Rexburg and St. Anthony as well as their animals!

VISIT OUR STATE OF THE ART OFFICE

REQUEST YOUR NEXT VISIT TODAY!

Font Resize
Contrast
Accessibility by WAH
Call Us Text Us